Ok girls (and guys), as promised I am going to reveal a little make up bag essential I have discovered. It isn’t ground breaking. It isn’t particularly pretty. It isn’t from some fancy designer label. It won’t make you look 10 years younger. BUT that doesn’t mean it isn’t super practical!

It’s a little mirror with a built in light. It isn’t the Les Tai Tai I have long coveted but it is a similar idea I suppose... 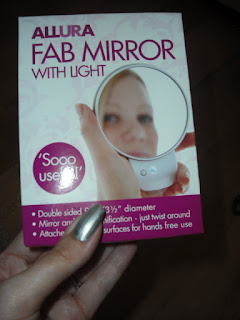 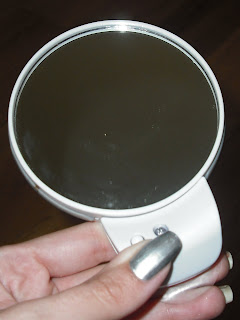 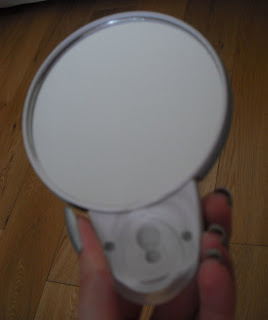 I stumbled across this in my newly opened local Poundland (no more travelling 40 odd miles to the nearest one!!). So there is a clue here are as to the price. For 100 of your finest British pennies you too could be the proud owner of this handy little contraption.

As the photos show, it is a double sided mirror (one side more magnifying) with a little light switch and light. It also has a little sucker pad on one side but I find I have mixed success with these. It comes with a non replaceable battery and although in the daylight, the light doesn’t seem like much, in a dimmer situation or in darkness it is a powerful enough little thing.

I brought this away on a hen weekend and it was great for using to apply my make up when there was a severe lack of mirror availability but most importantly it was fab in the morning when I woke up early (still covered in the last night’s make up, ooops!) and wanted to give my face a good clean. This allowed me to see what I was doing without having to wake everyone up turning on lights/opening curtains/finding a mirror. I also used it when plucking my eyebrows and the light/magnified mirror combination worked a real treat! 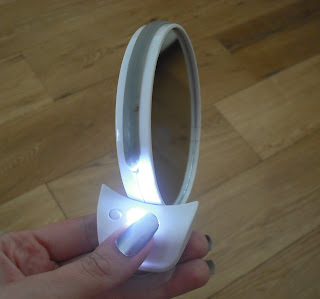 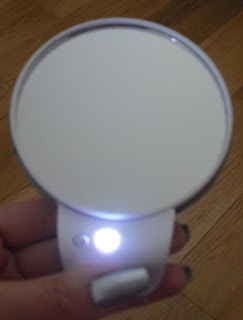 It is a good size – the circumference of the mirror is somewhere in between the size of a CD and a can of Coke (diameter is about 9cm), so maybe a bit large to bring on a night out in your clutch bag, but great for your every day make up bag/work bag/ to bring on holidays etc. The little box it comes in is handy to protect it though isn’t the prettiest either but it wouldn’t be hard finding a little cheap purse/pouch for it. The most significant down side I can think of is the irreplaceablity (have I created a new word?!) of the battery. However the fact the mirrors cost £1 mean a) I will be stocking up on more and b) when the battery dies in one the mirror is still pretty functional so it isn’t like it’s a complete waste!

I will do another post on my Poundland bargains but this was my favourite – what do you think?