Hi everyone I hope you're all doing ok - I can't believe today is the last day of June - where did this month go?!

Anyway this is another post where the photos don't really do much for the product - you really need to feel it and smell it to properly appreciate it. My coconut smelling obsession thing is still in full flight so I HAD to snap this up even though I tend to use aloe vera gel as an after sun. 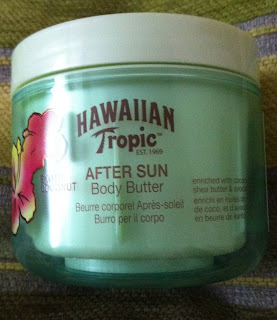 Now I'm not a big fan of body creams/lotions/butters. I don't like the feeling they tend to give my skin - that damp sort of greasy feeling (thus I love a bit of aloe vera gel!) so probably don't use them as much as my skin might like. Anyway this stuff smells good enough to eat and I figured that teamed with my aims of shredding and wanting to tone up it could help my skin maybe in tightening up. 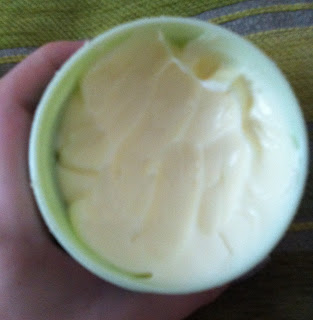 It feels and looks a bit like Palmer's Body Butter. It smells of coconut. It had a thick luxurious feel which I hoped wouldn't = goop sitting on my skin. It sank in much better than I expected and felt REALLY NICE on my skin. It leaves a scent which isn't too strong but is subtle enough for me to catch it every now and again.

I can't speak of its after sun capabilities (yet!) but as a moisturiser it gets a massive thumbs up from me. It smells gorgeous, applies nicely and leaves my skin feeling hydrated and soft without feeling slimy.
It seems to retail at around £10 but lots of places have deals on at the minute on sun care so I have seen it from as little as £4.99 in Tesco (where I got mine) as part of a half price promotion - which is a blessing really as there's a chance I'll have most of this used up before I even step on the plane...
I hope you've found this useful and aren't bored of the coconut talk yet. It can't be just me who loves this scent coming into summer can it?!