I’ve been meaning to do this post for a little while now. A few months ago my Benefit Bad Gal Lash Mascara ran out. It’s possibly the only mascara in years that has actually run out. Like properly finished. I liked it but at the time I couldn’t face forking out the £15odd to replace it.

Now, I do like mascara and I love a dramatic eye (or two!). When I wear makeup it tends to be all about the eyes and I love false lashes too so I like something which gives my lashes some nice dark definition.

I was wondering round Superdrug looking for a cheaper alternative. All I knew was I wanted black mascara, possibly in a chunky sort of container in a bid to get something similar (judging a book by its cover and all that...)

Bourjois Volume clubbing Mascara caught my eye. It offered “a dramatic look all night long. Extreme volume and ultra resistance”. And it cost just under £8. Hmmm, I thought what’s not to like.

Well when I got it home I realised the answer to the above. EVERYTHING. The brush was clumped with product. The product went onto my lashes in clumps. It seems like a nightmare to work through and there was so. much. excess.

So I gave up and went to back to using the random mascaras I’ve never actually finished (bad I know). I then picked up the Collection 2000 Big Fake False Lash Effect Mascara which I’d heard so much about. Costing just under £5 and promising “sensational lashes that really stand out from the crowd”, I was hopeful. The idea you could get the false lash look with mascara wasn’t lost on me and when I opened the mascara and saw the wand it was much more reminiscent of the Bad Gal Lash wand that the Bourjois one had been.

I was impressed, nice big wand, non clumpy mascara which applied nicely. If anything it was a little too subtle but great for work or day wear none the less. Similar to Bad Gal I thought, even in the way it seemed to dry out a little as time wore on (not so great!). Then I realised that maybe I was after something a bit more dramatic for a night look. I felt a little let down by the lack of actual false lash effect. 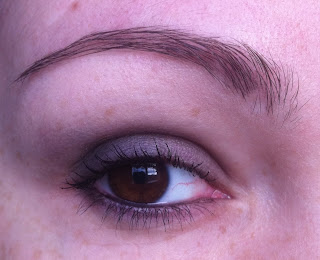 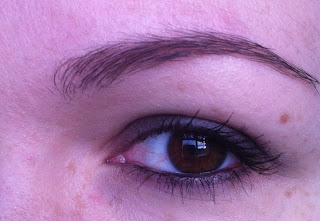 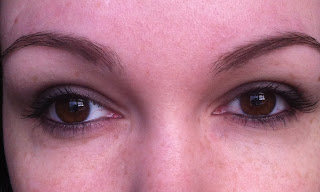 I’m very much on a drive to use everything up. I’m trying to spend less and waste less so I thought I’d persevere again with the Volume Clubbing Mascara. I had the Collection 2000 one as a trusty fall back after all.

Yes the Volume Clubbing wand was often overloaded but with some removal of the excess back into the tube and working of the product through the lashes I found it was actually REALLY GOOD. The product is very black. It makes my eyelashes pretty dramatic, so much so I do sometimes question whether false lashes are necessary on a big night out. I wouldn’t say it lengthens my lashes necessarily but I feel it makes them look thicker without being clumpy. And it lasts! I find it doesn’t dry out in the way most of the other mascaras I’ve used do. The sort of double sided brush wand takes a little bit of getting used to – at the minute I remove a lot of excess and used one side for one eye and the other side for the other and it gives a nice finish. 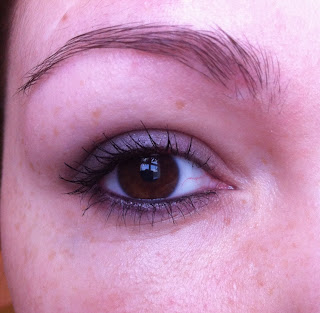 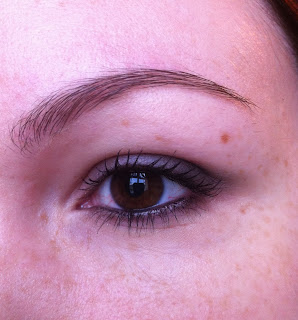 The eyeliner I used here is the Avon Supershock Gel Eyeliner which is the most amazing, highly pigmented eyeliner I have ever used. I’ve long been a fan of Avon’s black eyeliners but this one is a keeper. It lasts SO well and gives a really intense and smooth finish. I love it!! It usually costs £6 but is currently £3 so I must stock up. 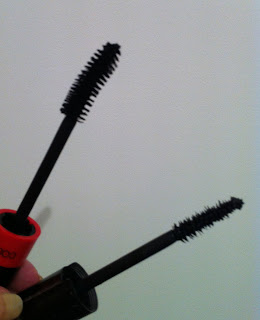 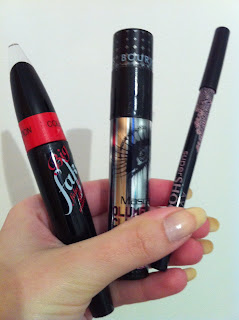 Have you tried either of the mascaras at all? Do you think there's much difference between the mascaras int he photos? I'd love to hear your thoughts :)
LoubouLush x
Posted by LoubouLush at 17:43 No comments: