I celebrated Halloween over the weekend but as today is the day I decided to give a little nod to Halloween in my outfit and wore my green vintage style dress from River Island (green is Halloweeny! Snot, goo, witches' faces, goblins.. etc etc). Excuse my slightly purple and swollen lip, I dropped my phone on my face while reading it in bed. Nice. 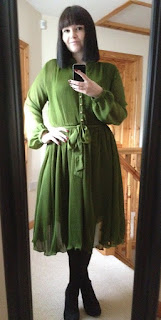 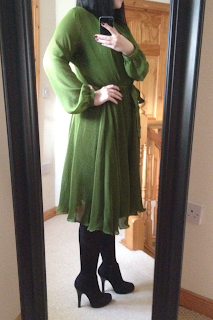 As a slight leftover to the weekend's festivities my nails are still sort of devil inspired using Barry M Instant Nail Effects in Black over Barry M Bright Red Nail Paint. Not really great with the green but ho hum! 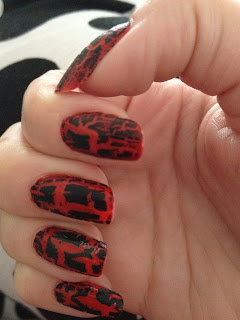 Hope you're all having a lovely Halloween! 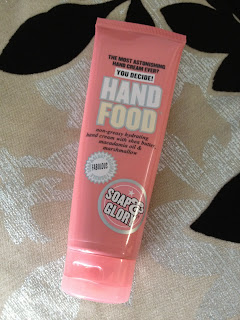 I thought I'd do a little name and praise for Soap & Glory's Hand Food. I've used it for a good while now as and when my hands have called for it. I'm lucky that I don't suffer too much from dryness on my hands but in this cold weather I do notice they could do with some TLC. I have a "thing" for not liking gooey creams though so find hand creams in general tricky. This stuff is fab though.

Moisturising but honestly not greasy especially if I use it quite sparingly (a little goes a long way). It contains shea butter, macadamia oil and marshmallow apparently. To be honest I'm not that bothered what is in it though I have to say I'm not a huge fan of its scent. Maybe it's because I touch my face a lot I do notice it. It's not hugely offensive or anything but it is there. But hey it works and I'd rather put up with the odd mild whiff than have my hands sliding all over the place!

For a more intensive moisture blast it is good for leaving on overnight with cotton gloves over the top.

Mine is a 125ml costing around £4.65 though you can get mini 50ml ones too which would be more handbag friendly.

I've been really busy over the last few weeks with work, I had a couple of functions to attend and in between it all me, my husband and Dad have been trying to whip my house into shape. I thought I'd do a little post to give a bit of a shout out to some great websites which seem to be taking up a lot of my time recently in my quest to redecorate and reorganise my house. So far we have completely redone our spare room and have a fantastic new Pax wardrobe system and Ratsy dressing table from Ikea. I love it more than words and will be doing a blog post on it very soon once I have tidied it up a bit and put some temporary bedclothes on the bed (I'm finding myself very indecisive on the colour scheme!) 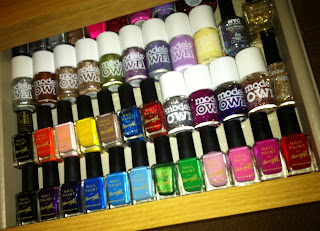 So I can't go further without a linky to Ikea I know Ikea isn't for everyone but I find it great value and pretty easy to navigate the store, even if the website could be improved a little. They did discontinue some of the Komplement range before I had the chance to buy it but I won't hold it against them...

The second fab site which has helped me immensely is Pinterest It has a wealth of "pins" of inspirational photos which include everything from interior design to funny photos to quotes and I can easily spend hours flicking through them all. I am a member through my Twitter (@louboulush) so feel free

to follow me there :)
Thirdly Rockett St George is a site I found through Pinterest and it is fabulous! It has a wide selection of fun and funky home ware and gift ideas. I can't wait to actually buy something from it. Roll on payday!

So there's my whistle stop tour of some favourites. Can you recommend any more similar sites of joy for me to spend more time on?!